A couple of months ago, Steve and I decided we wanted to do one more camping trip this year. I have very fond memories of camping at Devil’s Lake when I was a kid, and I thought it would be beautiful to go in the fall. This past weekend we headed up on Friday evening. We got there around 6:30, checked into our site, and got set up. I don’t have any pictures of the first night because it was dark and I was trying to feed Kai a quick dinner while Steve was setting up the camper. It always takes a while to get everything set up, but we eventually did, and I think we put Kai to bed around 8:45 that night. He has always slept great in his pack n play and in the camper, which is awesome. Steve and I roasted weiners on the fire for a late night dinner because we are super classy like that. We followed it up with s’mores as camping law requires.

Saturday morning we all slept in a little bit (for me at least) and I think we all woke up around 7:30-7:45. I made pancakes in the camper and Kai and I ate them all up (Steve is not a breakfast person, which I will never pretend to understand).

After breakfast we all took a walk down to the camp store for a trail map.

Devil’s lake is surrounded by bluffs and is known for it’s awesome hiking trails. By the time we left for our first hike it was probably almost 10am. We decided to start at the north end (where we already were) and headed up the East Bluff Trail.

I carried Kai on my back because I knew I wanted Steve to carry him on our more difficult afternoon hike.

We stopped at a few look out points and snapped some photos. It was so pretty up there.

We didn’t hike too long because before long it was time for Kai to eat lunch and take a nap. We headed back to the campsite and I made Kai a sandwich. Kid loves dining al fresco.

Steve got to work setting up the new to us screen room on the camper. Not really necessary on this trip, but we wanted to try it out. Verdict – love it! 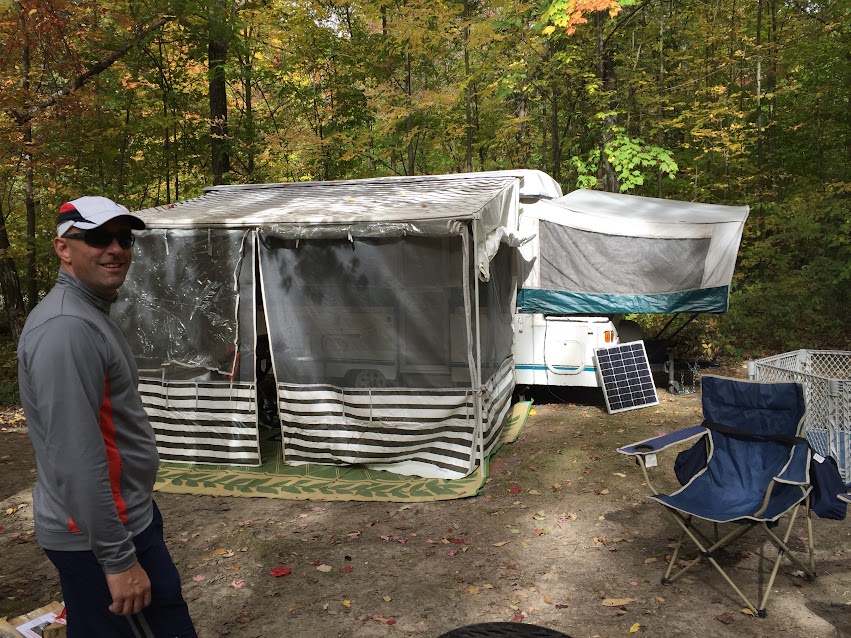 Kai went down for his nap, and Steve and I enjoyed a beer by the fire. Yes.

We also made pudgie pie sandwiches for lunch.

Kai slept for about an hour and a half and then he was ready to party. He loved walking around the campsite (and into the road, silly boy). Good thing we brought his play enclosure along.

For our afternoon hike, we drove around to the south shore of the lake to do the Balanced Rock Trail. Let me just say that since it has been years since I hiked this trail, I did not recall exactly how difficult and treacherous it is. Thank goodness Steve was carrying Kai and felt confident in his footing, because there is no way I would have felt comfortable with him on my back. The trail is all steep rock steps that are uneven and slippery, and some of them move. One wrong step or slip and you could literally tumble down the bluff.

On the way up we somehow missed the off chute of the trail that leads to the balanced rock itself. The views however, were amazing. 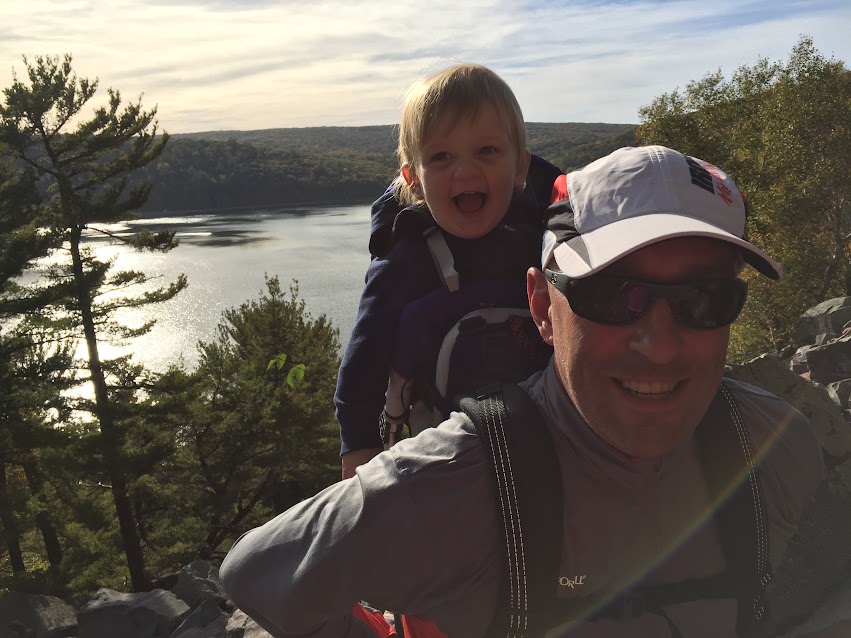 On the way back down we did find the balanced rock and stopped for a photo op.

I took this shot on the way back down so you can see how steep and technical the trail is.

Once we reached the bottom I stopped having a heart attack and spotted a giant rock that I knew I must pose atop of.

After the hike we stopped at the concession stand and I got ice cream, obviously. We let Kai loose to play on the playground there for a while before heading back to the camp site. I should have snapped a pic of the playground because it was pretty cool. Instead of wood chips, the ground was covered in ground up tires so it was nice and soft and bouncy.

Back at the campsite, I put Kai in his snuggly suit because it was kind of cold and windy, and because it is adorable. I made him a quesadilla for dinner which he would not touch (even though it is one of his favorite foods at home).

Kai was pretty worn out and I think he went to bed around 7:30 this night. Steve and I made tacos for dinner and sat by the campfire. The wind was a little ridiculous and was blowing the smoke every which way, but we finally figured out where to put our chairs to get the least amount of smoke in our faces. I practically fell asleep in my camp chair before calling it a night. I slept horribly this night due to the wind being obnoxiously loud and a pole above our bed in the camper falling on me no less than five times (yes, the parts have already been ordered to fix this little problem for next time). Kai was up around 7am Sunday morning, and I made pancakes again. We all felt lazy and hung out in the camper for a long time before getting motivated to start packing up. Kai made himself useful in rearranging one of the cabinets.

I chased Kai around the campsite while Steve popped the camper down.

Turns out our little man is very handy like his Daddy and helped get the trailer hooked up, no problem.

We tried to stop at the nature center on the way out because I thought Kai would enjoy it, but turns out it was 300 yards straight up a steep trail from the parking lot. After all of our hiking the day before, Steve vetoed that plan immediately. It turned out ok, because Kai was asleep with in three minutes of leaving the park.

And with that, Claudette is safely stored away, ready for the camping adventures that await us next year.