It has been 5 weeks and 3 days since I have run. Not that I’m really keeping track or anything. I have not worn the boot since early this week. I have been trying to at least wear running shoes vs sandals for a little extra support. My foot is slowly improving. Sloooowwwwwwllllllyyyyyyyy…. It still feels tight on the bottom, especially at the end of the day. Fun side note: on Tuesday I looked in the mirror and noticed that my hips were way off. Now they are usually off, but I am talking right hip two full inches higher than the left and also rotated forward. I speculate it is from wearing the boot. Since it is so thick on the bottom, it jacked my entire right side up and out of whack. Thank goodness I work at PT clinic where people know how to put me back together and get my body lined up correctly.

I feel like I am watching racing season slowly slip out of my grasp. I was really hoping to be able to run the 50k at the North Face Endurance Challenge, but at this point I will be happy if I can run the half marathon. Let’s face it, at this point I would be happy to run at all. Period.

See? This is the kind of thing that happens when you take running away from me. I kind of love it.

I got to spend lots of time with my family over the holiday week.

As well as experiencing the most hysterical tube ride of my life. Seriously. I was crying from laughing so hard and had a sore throat from screaming so loud.

And because they tend to make everything better, kittens!

My cousins have two. Lilo & Stitch.

The good, the bad

The good: My foot is feeling somewhat better. I have been going mostly without the boot since Wednesday, and it has definitely improved from when I first went to the doc.

The bad: It doesn’t feel like it’s anywhere close to running. It is making me crazy and sad. I still have pain especially on the bottom of my foot and it feels like it would flair up in two seconds if I tried running. I see the doc again tomorrow morning so we’ll see what he says.

The good: Summerfest. I got to go two nights in a row on Thursday and Friday, and saw some really good concerts.

The bad: I had to wear the boot to both concerts, and it was approximately 124 degrees inside that thing. Yuck.

The good: Summer. Boating. Outdoor activities in the sweltering heat.

The bad: The sweltering heat. I don’t even know when the last time was that it rained. Our grass is brown, along with the entire state of Wisconsin.

The good: My brother and his wife are coming into town tomorrow and staying for a week. This makes me very happy and excited.

Things that are finally in season: 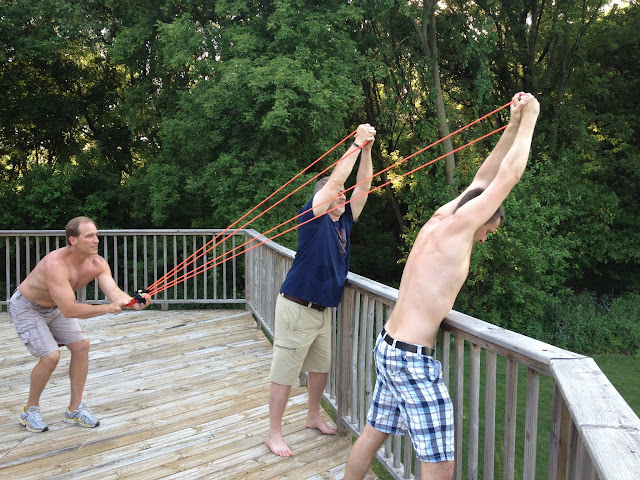 And spending the day on the water

This season could last forever, and all would be right with the world.

Comments Off on The best season

Out on the boat

Even though our summer weekends have been filled with a lot of training hours, I always try to make sure to do plenty of summer activities as well. It’s always tempting to lay down on the couch and nap the afternoon away after an 18 mile run, but summer is short and we have to take advantage.

Saturday morning was an 18 mile run that almost didn’t happen. I have been having some pain on the bottom/side of my right foot, which has caused my calf to be in a knot from trying not to land on it while running. Friday night I could barely put pressure on it, and it didn’t feel much better Saturday morning. The thought of doing a 3 hour bike ride instead of running made me want to die a little, so I put on my compression socks and running shoes to see how it felt. After a couple of laps around the condo, I decided it wasn’t so bad.

I paid really close attention to it during my run, and though my calf was sore the whole time, my heel didn’t seem to be getting any worse. I ended up with 18 miles (out of a planned 20). My Garmin froze up two miles in, which was a blessing in disguise because it allowed me to forget about the pace and just take it really easy. My heel didn’t feel any worse after, thank goodness.

After running, Steve and I decided to take the boat out to try and catch the end of the air show that was happening in Milwaukee. We really wanted to see the Thunderbirds show, they are so loud and awesome. When we got to the boat storage, we were greeted with this:

Ugh. While Steve worked on changing the tire,

I made myself really useful by taking pictures of myself and my iced coffee.

The Thunderbirds were performing as the tire was being changed, so we just missed them. We could hear them loud and clear though, and we did see them fly over the boat storage several times.

Even though we missed the show, we still had a great time cruising around on the boat. I will never get sick of the view of Milwaukee from the water.

There were so many boats out, probably because of the air show and the perfectly breezy sailing weather. Can you spot all of the sailboats?

After cruising around for a while, we were hungry. We headed to the Milwaukee Ale House for some outdoor dining.

I had a margarita (which I could barely finish because it was so sweet) and a black bean burger. Look at this beauty.

We were determined to get our 5 hour bike ride on Sunday done in time to actually see day two of the air show, but mother nature had other plans. The plan was to leave at 7am, be back by 12:30, and be on the water by 1:30. I woke up at 6am and started getting ready. By 6:30 it was storming. We waited it out and didn’t end up biking until 11am. So much for the Thunderbirds.

We rode out to Steve’s sister’s house which is about 46 miles away. I am not kidding when I tell you that the entire way there was uphill and into the wind. It was horrible. Then about 6 or 8 miles before we got there, it started raining. Then it started pouring. We couldn’t see a thing, and I declared that I would not be riding home. (Not sure how I was going to get back, I didn’t think that far ahead).

After a nice visit with my sister-in-law and eating all of her wheat thins, I felt better. The sun was back out, and it was quite steamy. The ride home was a million times better than the ride out. It took us 2:45 on the way out and 2:30 on the way back. We ended up with 92 miles in 5:15, not too shabby. And then it was time to eat tacos and collapse on the couch. We watched Rango, which I was loving but of course I ended up falling asleep.

What did you do this weekend?

Comments Off on Another packed summer weekend

Filed under Food, Fun, The bike, The run, Triathlon

About to get crazy up in here

What a weekend. I tried to soak it up as much as possible, because it was likely my last chance before September 11th. You see, last week was a “rest” week in the training plan. What that means is I only had to work out 8.5 hours instead of 16+. Instead of spending 9 hours of my weekend training, it was spent on the boat. 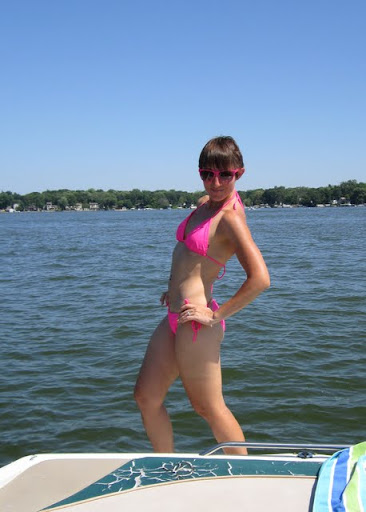 I truly apologize for that picture. I just wanted to show you that I busted out my 80’s hot pink swim suit and glasses for the occasion. 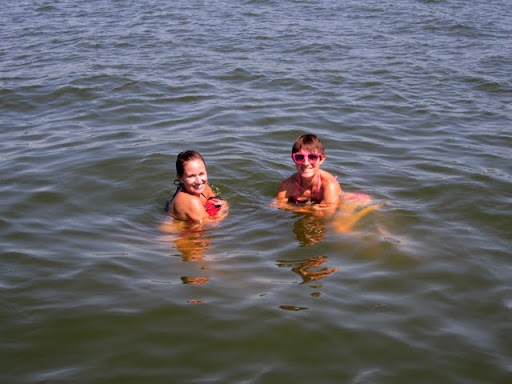 It was in the 90’s all weekend, and the water in the lake was probably at least 85 degrees. I didn’t even get goose bumps when I jumped in, and I was able to stay in the water for more than 90 seconds without being cold. 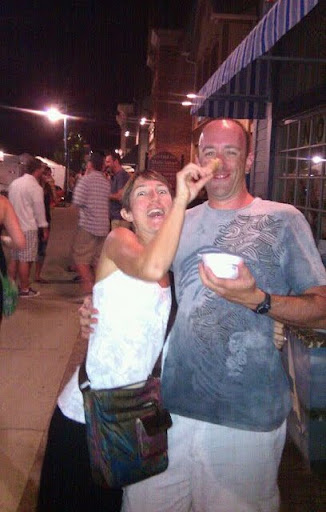 Sunday was a repeat day on the lake. I was able to get in a little water skiing action, although the lake was really choppy so it wasn’t that fun. 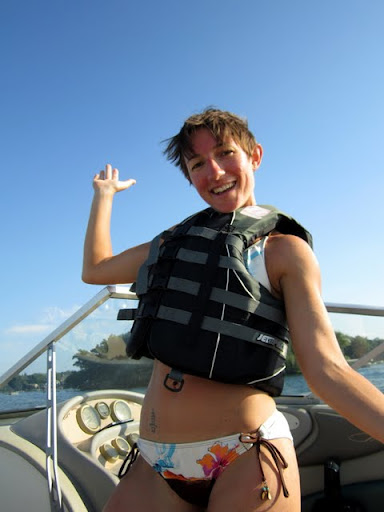 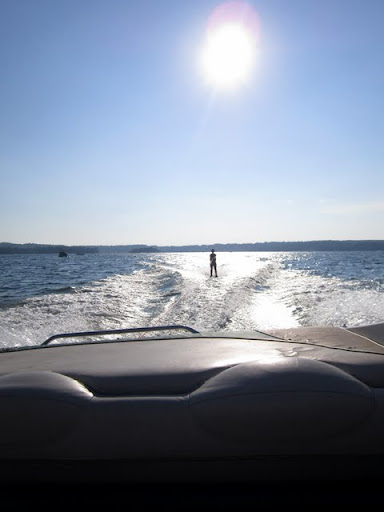 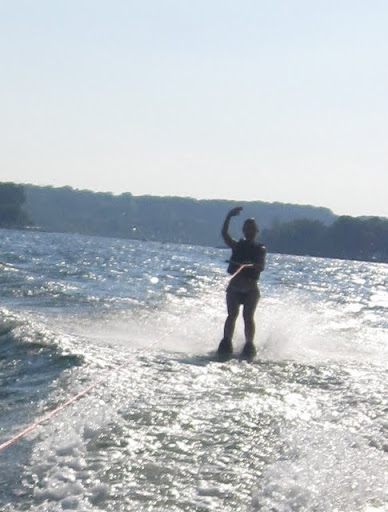 And now, things are about to get crazy. Training wise, that is. Today is day 1 of our final three week build, then there is a gradual three week taper. I like this training plan because it builds for three weeks and then has a rest week, so I feel like I can mentally handle it because a break is on the horizon. The last four weeks looked like this: 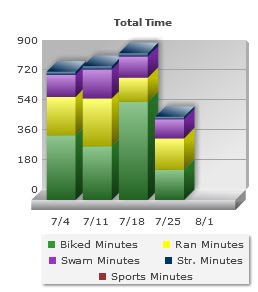 And volume has slowly been building: 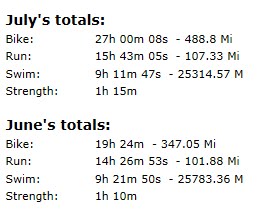 Please ignore the fact that I have only done 2 hours and 25 minutes of strength training in the past two months. Fail.

Just for fun because I am a nerd, I graphed out my training volume for 2011 to date: 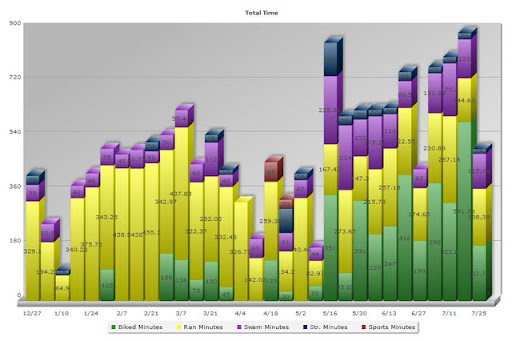 Can you tell when Ironman training started? Here is the same graph in total distance instead of total time: 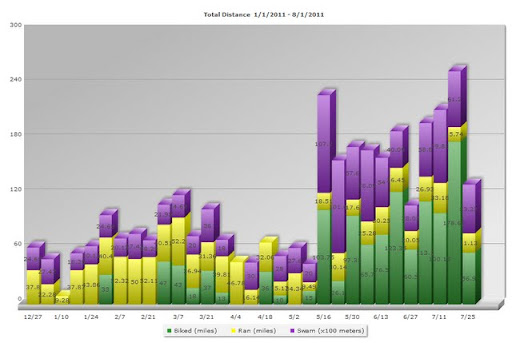 Yep, that about sums it up.

What was the best thing you did over the weekend?

I would have to say the peanut butter cookie dough ice cream was the highlight! (along with spending two glorious days outside on the boat of course)

Last night Captain Steve took us (me, my mother-in-law, Steve’s brother and his date) out on the boat for the big fireworks display in downtown Milwaukee.

Milwaukee really is pretty from the water.

The fireworks lasted for a full hour, and I have to admit that I dosed off a few times. It’s because I am 80 years old.

There really is no better way to enjoy the fireworks than on the water. Best view ever, and the booming sounds echoing off of the water and the buildings is awesome.

Ps. Get excited because I attended a Rockin’ 80’s party on Saturday night, and there are lots of pictures. Here’s a teaser: