Last week (August 8-15) marked our annual weeklong family camping trip at Peninsula State Park in Door County. We weren’t able to camp last year since Kai wasn’t even three weeks old, so we were extra excited about the trip this year. Between everyone we had four campsites and my aunt and uncle’s family stayed at their house nearby with my grandma. We left on Saturday and our departure became a huge ordeal and did not go as planned. Steve had two separate problems with the camper that needed to be resolved, and Kai sliced his finger open on the edge of a full length mirror hanging on the back of our linen closet door. So while we aimed to leave around noon on Saturday, we left around 4pm and arrived in the park shortly after 7pm. The huge campsite dinner was in full swing with about 32 people at the campsites. Luckily they set aside some food for us, because by the time we were all set up and got Kai to sleep it was at least 9:30. Not the greatest of travel days, but at least we made it and were able to enjoy the campfire for a bit before going to bed.

Sunday morning they guys left at 7:30 for golf, and I went for a 6 mile run while my mom watched Kai. I was supposed to do my long run this day, but with the long packing/travel day and late night dinner I wasn’t feeling it. The ladies and kids met at PC Junction at 11am for lunch. PC Junction is a fun restaurant where your food and drinks come out on a train car, and they have lots of outdoor pay spaces for the kids. Kai perused the menu and decided upon the grilled cheese with applesauce.

Then I got out my selfie stick and went to town. Thank goodness Steve wasn’t there, he would have been mortified.

After lunch (Kai ate his entire sandwich and applesauce), we headed outside for some fun. Kai chose the swing and as usual seems nonplussed, but he really does love it, I promise.

My mom and I took the boys (Kai and his cousin Ashtin) for a lap in the pedal carts, and nearly died of laughter when I could not steer us over a small bump.

More selfie stick action. How did I not have one of these sooner??

After all of the fun, we headed back to the campsite and Kai took a nap. I couldn’t believe how well he slept this whole trip in the camper. He took naps like a champ and slept though the night no problem. We had his pack n play set up on one of the bed platforms in the pop up camper, and had his noise machine going just like at home.

Sunday night we had pudgie pies for dinner and enjoyed the campfire.

My memory is already fading and I failed to take several billion pictures this trip (too busy enjoying it!), so I can’t give a daily recap of every day. From here on out I will just show a lot of pictures and attempt to remember some of what we did.

We definitely enjoyed soft serve on several occasions. Kai was a fan.

We spend a lot of time hanging out at the campsite. I set up a play enclosure for the boys, and they demanded that grandma and grandpa get in and play with them.

We brought Kai’s walker thinking that it would keep him off of the ground since he is not quite walking on his own yet, but now that he has been walking with the aid of just one finger, he wanted nothing to do with the thing (despite his happy expression here).

Several wagon rides were had around the campground, and Kai’s expression here is my absolute favorite. So not impressed.

One night we rode our bikes to see the sunset at one of the neighboring camp areas. Beautiful.

We also brought Kai’s own little camp chair along, knowing that he probably wouldn’t really sit in it. This shot was taken the one and only time he sat in the chair, and seconds before he tipped it over and landed face first in the dirt. Poor guy had dirt in his mouth and a bloody lip. Guess he will be more capable of sitting in a chair next year.

On Wednesday night we had a pizza party and my aunt and uncle’s house to celebrate Steve’s and my cousin Kelly’s birthday. My mom made a chocolate cheesecake since that is Steve’s favorite.

On Thursday we took a trip over to Whitefish Dunes State Park to go hiking and to the beach.

The hike was really beautiful along the lakeshore. The water is usually really rough over on this side of the peninsula, and you can hear the waves crashing into the rocks below.

Our whole hiking gang. See how awesome the selfie stick is??

After our hike, we went to the beach, where Kai loved walking around in the sand and surf.

Kai loved the sand in general, and he most definitely got it everywhere on this excursion. He needed to be hosed off that night in a major way.

Overall the weather on our trip was very good. There were a couple of storms that came through, and those are the times it is so nice to have a camper to hang out in instead of a tent.

As I mentioned, Kai slept really well throughout the whole trip. Most days he just took one long nap in the afternoon, but a couple times he fell asleep while we were running with him in the mid-morning. Then he took a short nap in the morning and a longer one in the afternoon.

Before we knew it, it was Friday. We went out to dinner on our last night and enjoyed some delicious food. 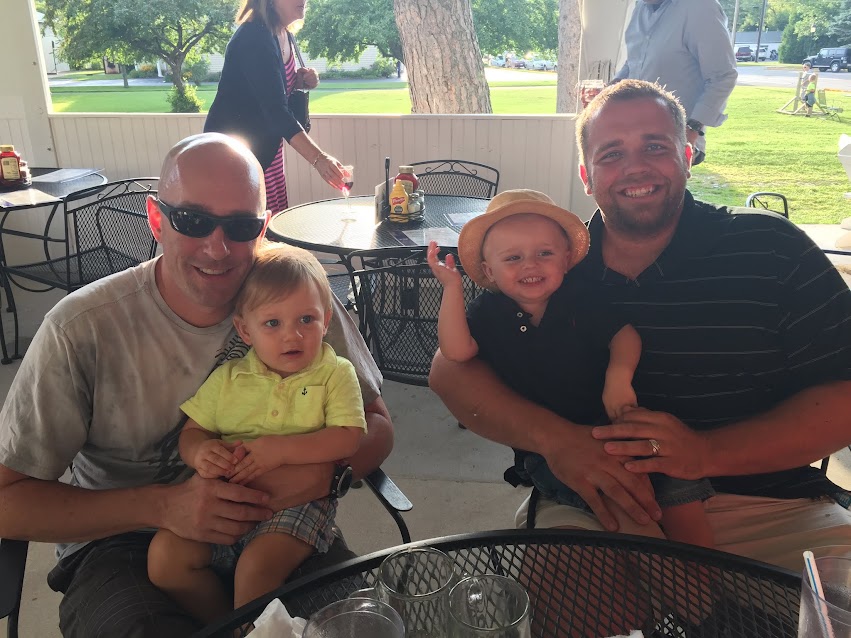 The trip was so much fun and I felt really sad when it was over. Why does vacation always fly by so fast?? Luckily this is a trip we can look forward to every year, and we do get to visit Door County somewhat often. We are going to see if we can squeeze in one more camping weekend this year in the fall since we do have a heater in the pop up. I have great memories of camping as a kid, and I love that now we can bring Kai with us and make more great memories as a family.